← General Musings
Warlocks and such (EQ2) → 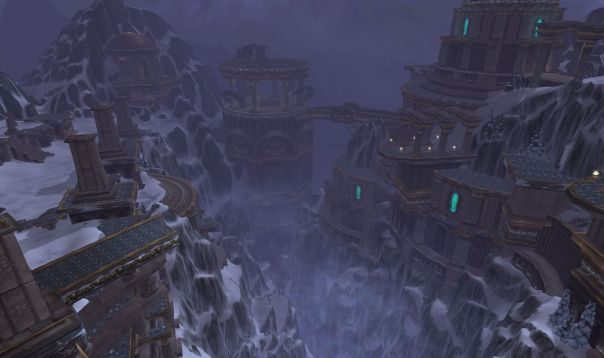 I’ve been spending a lot of time in world of warcraft since me and EQ2 have had a sort of falling out (it really began months ago but became more ‘steady’ these past two or three months). There are those who would laugh at me for choosing an ‘easy cartoon game’ (their words not mine) and who can not begin to understand what I find fascinating about the game – then there are others who can appreciate the fact that I am a nomadic gamer at heart and I do tend to bounce around playing whatever strikes my fancy.

One comment I hear more often than not is that World of Warcraft is not a ‘pretty’ game. That people don’t enjoy the ‘cartoon’ like art style. I actually enjoy the look of the game, it’s a nice respite from the ‘realism’ that I see in games like EQ2, and Lord of the Rings Online. I also think there are some amazingly designed zones with an incredible amount of detail, especially in Burning Crusade and Wrath of the Lich King.

“The Storm Peaks have a mysterious history. Long ago, the titans lived here. They created Ulduar as their city, and it is from here that they conducted their experiments. It is said that the Storm Peaks are the origin of the storm giants, and perhaps the dwarves and troggs as well. When the titans disappeared, the races were left to fend for themselves. The dwarves moved south into warmer climates, but the storm giants remained and claimed Ulduar as their own. They developed crystalline golems to aid them in their research and as guards. Over time, the storm giants have dwindled in number and grown ever more reclusive. Now only a handful remain.

The storm giants make their home in the Storm Peaks. They are of an impressive size, more than 30 feet tall and powerfully built. The storm giants are capable of summoning small storms. They keep to themselves, hiding in their caves and tunnels below the surface, and avoid visitors. Myths say that the titans created the storm giants; perhaps dwarves have an origin in common to the storm giants. It is possible that the storm giants may know more about the dwarves’ past than the dwarves do themselves — however, they are not likely to tell anyone about it. The storm giants like their privacy, and their crystalline golems help maintain that. They are the same golems that reside in Crystalsong Forest, gathering crystals to bring back to their masters. In Crystalsong Forest, they are servants and couriers. In the Storm Peaks, they function as door wardens and bodyguards, making sure no intruder gains entrance to the storm giants’ lairs. Magnataur and wendigo are known to roam the area. The magnataur are solitary and easy to spot. [Wowwiki.com]”

I love the lore of the game, there are stories everywhere and while I may not spend very much time in game reading through my quest text – I DO spend a lot of time outside of game reading about the zones that I’ve been visiting. I love learning that everything has a story, a reason for being in the world to begin with. While I’m certainly no lore expert (I just enjoy the stories, not the technical aspects) I can appreciate the amount of work that goes into creating the universe that I’m playing in.

I think perhaps we (as gamers) are too quick to judge a “game by its cover”. Taking the community of WoW to represent the game itself. After playing for a few months now I can certainly say that the community is probably one of the worst that I’ve ever experienced in any game. If it were not for the fact that I am in a relatively friendly guild, I probably would have moved on long ago. Being in a guild and running dungeons as a guild as opposed to constantly running PUGS (pick up groups) has allowed me to ignore a vast majority of the community and focus on what I enjoy most – the game. When it comes right down to it, World of Warcraft is just as ‘pretty’ as any other game out there I’ve played. Even if it does have a ‘cartoon’ feel to it. The style may not appeal to everyone but I like to think I can appreciate those differences.

Just another female gamer with too much time on her hands.
View all posts by Stargrace »

Posted on September 17, 2010, in World of Warcraft. Bookmark the permalink. 1 Comment.

← General Musings
Warlocks and such (EQ2) →