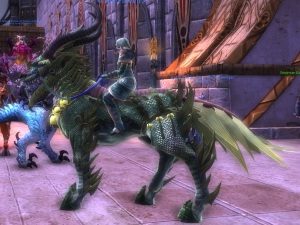 This is the Ki-rin, not the Ice Strider 😛

So Rift went “Free to Play” this past week and finally opened up The Dendrome zone.  Since a big part of why I drifted off was that I felt I’d more or less “done” the part of the Storm Legion expansion that interested me (ie the leveling) and was now repeating content for the 3rd/4th time on my mage, I just kinda drifted off.  I still love the game, just… didn’t have the drive to log in anymore.  But hey… new areas to explore!  I’m in!

I really like the fish-scale texture on this one

Since I consider my cleric to be “my main” I logged it in 1st.  Found some mail in my box including a nice “Ice Strider” veloci-tauntaun mount.  Opened up the Rift store and dang!  Over 20,000 gems?  That’s something like $130 worth.  I looked through the store to see what was available and really liked a lot of the armor sets they’d build.  Some nice mounts were available too as well as bigger bags (that I don’t need), more bank space (which I could use on all of my toons), and Holy Hannah!  19 wardrobe slots now?  Makes sense with all the various wardrobe options in the store, I suppose.  I was surprised to see actual gear with stats on it in there too.  That’s guaranteed to bring out the cries of “Pay 2 win!  It’s pay 2 win!” and specially in this case since the gear I was looking at was Tier 1 blue gear from the expert dungeons.  But, with that said, I also looked at the prices and it looks like fully outfitting a toon in that would be about 10,000 coins, and that’s not even taking into account the cost for the upgrade tokens that could make it all into Tier 2 gear.  sure you *could* buy your way into that gear, but at those prices…. yowza.  I’d rather buy a year-long sub for $120 and work it myself than pay the same amount for the gear straight up. 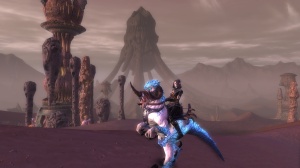 *This* is the Ice Strider

So anyway. looked at all that, thought it was a nice store, and then logged in my rogue.  Grabbed the Ice Strider mount out of my mailbox, claimed the loyalty rewards that don’t take up bag space, then headed into the Dendrome.  The quest lines are the standard mix of kill 10 shmeerps, collect 5 clickies, run here, do that, etc.  The zone itself is pretty right as you get into it. Kinda jungle-themed in a band along a mountain range that separates the desert of Ashora from the desert in the northern part of the Dendrome as well.  Some interesting floating platforms and jumping pads as part of a quest early on too.  Not a jumping puzzle since the pads throw you exactly where you need to go, but still something of a thrill. 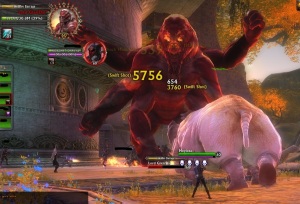 I feel like this guy chased me off a bridge somewhere . . .

A big zone event started shortly after I got there and it took me away from the area where I was questing, so when the big boss was downed, I just started exploring the place.  Saw my 1st “stronghold” which is a heroic-level foothold/onslaught combination thin.  You have to kill the outlying footholds and their defenders then call in a Storm Legion mecha to break the shield on the main foothold before you can take it down.  Once that’s done, then you can put down your own 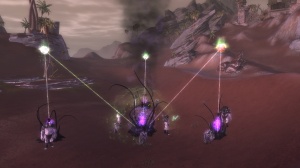 foothold thingie on the ruins and it puts some jump pads up above you and then you start the onslaught phase of it where you defend your device from the invading waves.  Some of them fly, so you can leap up to the upper pads and get close to the mobs that way in order to take them out.  It’s quite a nice event for small groups, I think. 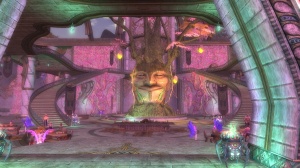 I eventually stumbled into the town/outpost of Hailol.  Fun little place.  Atrophinius seems to make a lot of appearances anymore.  I guess people like him or something.

So anyway, it’s been fun.  I’m looking forward to finishing out my explorations of the Dendrome and doing the quests to get the story/lore.  And perhaps a few of those nice outfits from the store. . . .