[FFXIV] [ESO] More Tanking, and Briefly Back in ESO

Warrior unlocked! Does this mean I’m a real tank since I have both jobs now?

I’m continuing to work on the tanking classes in FFXIV.  Something I found interesting was that by level 32 I’d managed to complete my “Difficulty 4” hunting log.  Between being a tank and my chocobo companion, I was taking on level 39 and 40 mobs just fine.  There’d be downtime between fights and I’d be popping cooldowns during the fights, but they were doable, so that was nice.  I’ve got Paladin to 34 and Warrior to 33 now.

Everything I’ve read says that Paladin has a hard time tanking in the 30-40 range, due to dps classes beginning to get their advanced damage skills in the 30’s but Paladin doesn’t get its Shield Oath tanking stance until level 40.  I’ve only tanked Haukke Manor as my highest dungeon so far as Paladin but I did it both at 28 and sync’d down to 31.  In both cases I was able to hold aggro vs a sync’d melee dps who looked to be in i130 gear, so it didn’t seem to be too big an issue.  Of course, I’m not averse to using my mana bar like most Paladins seem to be as they’re leveling.

I have no idea what that mount is, but I’m going to have to find out becuz I want one!

For my tanking I have a marking macro, so I can instantly mark targets.  People have seemed to be more likely to follow that marks as I’m getting higher in levels too, so that’s been helpful.  As a Paladin I pretty much target a mob, hit the marking macro, run in with a Shield Lob, then hit Flash 3x to get initial aggro lock.  Then I’ll hit #1 with Fast Blade and Savage Blade, swap to target 2 and hit Rage of Halone.  Back to 1 and Fast/Savage again, then swap to 3 and Rage of Halone again.  If I seem to be having aggro trouble I’ll add in a Flash after each RoH, but so far I’m not finding that to be necessary.  After #3 is hit with RoH, usually #1 is now dead, so I swap to 2 and do the Fast/Savage/RoH combo on it until it’s about 10% health, then I move to #3 while the dps finish it off, so I can get a jump on #3’s aggro before they switch.  For bosses I Shield Lob as I run in, Flash x2 and then Fast/Savage/RoH until it’s dead, popping CD’s as necessary, picking up adds with Shield Lob, Flash, and/or Provoke as needed.  It’s generally been pretty chill.

For the Warrior, it’s not really that much different.  Skill names are different, and I like to hit Overpower 3x instead of Flash for the Paladin, but since I also have Flash as a cross-class skill…. Tomahawk, OP x3, Flash, and then do the 3-hit combo, with the mob swapping to be sure to be applying aggro all around.  What makes warrior a little more interesting is that you need to weave in Maim every 18 seconds for the damage boost, since doing more damage = building more aggro.  Other than having to weave that in and watch my TP bar a bit since Overpower uses a lot of TP, it’s really feeling functionally identical.  But with that said, doing Brayflox for the 1st time as a Warrior, even the sync’d Dragoon never seemed to have higher than 25% aggro, where on the Paladin, the sync’d melee dps seemed to always be 85-90%.  So yeah…. Warrior seems to have an easier time of it right now, but the Paladin still holds the aggro.  As they say in sports… 1 point is as good as a million……  And FWIW, I let the group know before the run that it was my 1st time tanking it, and just before the Salamander boss, the sync’d melee told me “You’re really solid” so that was a nice compliment to get.

She’s quite adept at moving around anymore, and since she still doesn’t know how to fight, everything for her is roleplay.  She even stabled herself on her chocobo at one point, since “that’s where she’s going to sleep.”

Last night my daughter started becoming pretty insistent that she realllllly wants a fairy pet on her character, so I started working on her Arcanist again.  I had her sitting at level 16 for quite some time, and after last night’s round of leve quests, FATEs and a dungeon run, she’s now at level 25.  I’ll try to bang out those last 5 levels tonight, but it might not be until Saturday.  We shall see.  As it is, she’s become quite adept at getting around anymore.  She really likes the Carpenter’s Guild in Gridania since it’s got a small stage and she’ll hop up there and then turn on the Harvest Dance emote and walk away so that she’s performing for anyone who walks by.  This morning after I got her to 25 and did the class quest for that level, I left her character sitting in the Arcanist’s Guild in Limsa Lominsa while I went to take a shower.  When I got out of the shower she was in the Adventurer’s Guild/Airship area in Gridania.  Once I get her the fairy pet, I’m not sure what she’ll want me to do next.  It will be interesting to see… 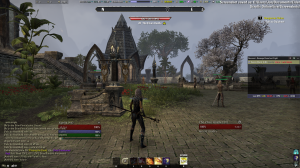 Add-ons out of date, don’t remember the controls, combat systems’ changed, need to re-jigger my UI again, also need to figure out champion points and re-do my build…. lotta work in going back to a game. But it’s still purty!

ESO went B2P this week, so I popped back in.  Just enough has changed to make me step back and go “Whoa!  I’ll need to do some reading to figure out how to play again.”  But since I’m still extremely enamored of FFXIV right now, well…. I think Syncaine sums up my attitude:

“Playing the relaunch of The Elder Scrolls Online just reinforced how much better FFXIV is at being a thempark MMO. I might still try to get back into ESO at some point, but after spending 15 minutes with it, I’m more than fine waiting a bit longer.”

Happy Gaming out there!