It’s been a busy week at work, so I missed my usual Monday morning post, so… time to catch up!  I got my Dragoon to 50 last weekend, and this time remembered to check my retainer’s inventory for high-level gear — and didn’t have any that I hadn’t kept in my armory chest this time.  Even so, the i70 spear I’d bought off the Market Board and the i100 ST gear I’d managed to pick up on greed rolls still brought my ilvl to 66, so still a decent bump.

After hitting 50 on the DRG though, I again slumped into FFXIV “expansion apathy” figuring that any gear grinding I might do the past weekend would be almost immediately rendered moot this current weekend.  This was born out when the 3.0 Patch Notes were released and we got told that Poetics will now be the “standard” tome, Soldiery will be converted to Poetics, and there will be a new “higher level” Tome of Law going forward.  So any tome grinding will now reward i120 gear rather than i100.  And possibly even higher in the new areas before even beginning to delvei nto the Tome of Law gear.  I’ll find out as I explore the new areas more, obviously.

As a result, I ended up buying The Witcher 3 since it’s 10% off on the Steam Summer Sale.  And while it downloaded, I fired up Civilization: Beyond Earth for the 1st time since the weekend where I bought it.  I’d forgotten enough that I felt like I was learning to play all over again, though by the end of the 1st game I felt up to speed again.  And then fired up a 2nd game and stayed up until 2 am finishing it.  And then the next evening pulled up CivBE again….. and I’ve pretty much been only playing it this past week.

Though only “pretty much.”  I did fire up Witcher 3 and at least made it out of the tutorials.  Man that’s a lot of cutscenes.  But they were quite gloriously well done too, so….no complaints.  I thought I’d taken some screenshots, but can’t find where they are if I did, so.. I’ll keep looking and post more as I play more.

Except who knows when that will be becuz…… HEAVENSWARD!!!!!  I didn’t wake up early this morning, but still woke up a touch before my alarm went off, so I had about a half hour to see what was what before having to be an adult and get ready for work.  I logged in at 7:08 this morning and already had a queue to get in.  It was only 8 people and was done it about 20 seconds, but….. this does not bode well for tonight.  On the bright side, my wife and daughter will be visiting her parents out of town tonight, so I’ll have uninterrupted play time tonight, which will be nice.  Assuming I don’t have an hours-long queue…..

So anyway, I vaguely remembered finishing up the 2.55 story in Camp Dragonhead in Coerthas Central Highlands and that’s actually my teleport home point for the FATE grinds anyway, so I bipped there, went to the door that I thought was the place, but it wasn’t clickable nor was there an NPC outside.  This was probably due to slow loading, since later on I was plagued by slow NPC loads for quest NPC’s — they’d be marked on the map and I’d be standing on the spot, but they’d take 30+ seconds to load in.  But since I didn’t see any NPC to let me in the door, I asked in FC chat and got told to do my level 50 job quest 1st, so back to Ul’dah I went.  And then had to look up where the Black Mage person was becuz it’s been almost 6 months since I last had to use it….

The quest was literally “Go here and talk to the NPC, now go there and talk to the NPC, and ok go back to Ul’dah and talk to the NPC.”  And that was worth 24,000 xp (out of over 800K needed for level 51).  No new job skill or gear piece, just the xp and a notice that at 52 I get my next quest.  I looked it up and I will get a new skill at 52, so there’s that to look forward to.  I flirted with the idea of swapping to all of my jobs that are level 50 and running their quests to see if they’re all that easy, but I wanted to see Ishgard, so back to CCH I went.  This time the NPC was outside the door as expected, so I talked to him to go in, watched the cutscene inside that basically said “Go to Ishgard” and headed on out. 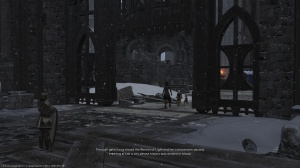 They let me in!

I got to Ishgard and becuz it’s a new city the 1st quest after arriving (and netting another 48K xp so I’m already almost 10% of the way to 51 without even fighting a single mob) is to go run around and get familiar with the place.  And this will award more xp and a piece of i115 gear.  Remember what I said about prior gear being instantly moot this weekend?  Yeah……..  Anyway, since there were a lot of cutscenes up to this point also, my half-hour that I had available was more than gone, so…. logged out since I can’t stay afk all day anymore, and got ready for work.  Hopefully I’ll be able to do a lot tonight and this weekend!

Happy Gaming out there! 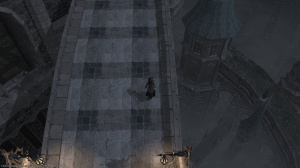 Looks like their architect also works for the Empire in the Star Wars universe — this high with no handrails?

Back at 45 I ran into an FC-mate who was 49. Odd how our gear looks so very similar. Or not since at 45 you get the class set and there’s only 1 chest piece worth wearing until 50…..

This other character followed my daughter around Mist for a while, which she thought was hilarious.

These 2 parked AFK next to each other for hours — as in, they were there when I left for work and in the same place when I got home that evening 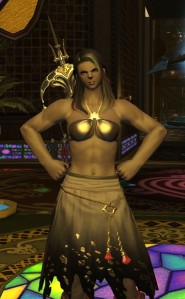 Remember the “Tutu of Doom” in my prior post? Yeah, couldn’t hack the look, so glamoured to this instead. My daughter actually chose the appearance.