← [Warframe] It’s All About The Mods
[Warframe] Progress Continues →

Limbo is kind of dapper looking, isn’t he? And the stats I use on him are there in the lower right corner.

A week or so ago I tried doing the “Second Dream” quest in Warframe.  I got almost to the end — there’s a phase where you have to destroy 4 indestructible items.  Good thing there’s this boss-thing (also indestructible) that fires lasers that do tons of damage and destroy the things for you as you hide behind them.  Too bad that it also drops bombs/mines all over the floor that you have to avoid as you move around.  Anyway… short version is that I failed the mission there due to not quite being able to dance around as I needed to.

I asked J how he did this mission and he said “I cheesed it with Limbo.”  I didn’t have Limbo at the time, as I was still working through the “Limbo Theorem” quest that awards the blueprints, so I hurried up and finished that quest (which requires archwing stuff, and is why I upgrade my archwing as noted in a screenie in yesterday’s post) and built the frame.  I ranked it up last weekend with the double-XP weekend made quadruple-XP since I bought an XP booster.  I could rank a frame from 0 to 30 in about 40 minutes that weekend — it went fast.

Thing is, though…. I was in a group situation and just ranking up vs swarms of infested in a defense mission, so while I looked up “best builds” and knew I’d want 2 forma on the frame to be able to do them (and did it, so I ranked it up 3x on the weekend) I still didn’t really know how the abilities worked or how to use the frame as anything other than a squishie gunner in the defense missions.

To Youtube for video guides showing examples!  And from the guides… um… wow, it looks kind of cheesy.  Scratch that — *insanely* cheesy.

1st off, the frame has a passive ability where it can simply do a dodge and that “puts it into the Rift.”  This is colloquially known as Rift Walking in the game.  While in the Rift you are invulnerable and you regenerate energy quite rapidly, plus any mob you kill while in the Rift grants you 10 energy as well.  Yes, that’s right — this frame passively goes invulnerable and regenerates energy.  That by itself is stupidly overpowered.  The only downside to this is that you can’t interact with anything in “normal space” while you’re in the Rift.  Sure, the mobs can’t hurt you but you can’t hurt them back either, nor can you loot a container, hack a terminal, etc.

Except, then you have your abilities.

Ability 1 “Banish” tosses anything you hit with it into the Rift — or tosses something in the Rift with you back out to normal space, as well as minor damage if it’s a mob.  No damage to players 😉

Ability 2 “Stasis” freezes any mob in the Rift.  And if you mod for duration it lasts for *75* seconds, as you can see in the screenie.  A fun thing about a mob in stasis is that if you shoot it, it doesn’t actually take any damage until the stasis either runs out or you Banish it back to normal space.  But if you melee it, then it takes damage normally.  Go figure.  Regardless — a mob in stasis is just a loot pinata.  It quite literally can’t do anything while you kill it.  And you have *75* seconds to do it.

And finally, Ability 4 “Cataclysm” creates a Rift Bubble.  Anything inside the bubble as you cast it takes some damage and is also now inside the Rift.  You can cast this while you’re in the Rift yourself, so it brings mobs in to you.  It also bestows the same benefits you have for being in the Rift to your teammates if you’re in a group, so they gain invulnerability to any mobs outside the bubble plus the energy regeneration.  And if you’ve got Stasis already running, any mobs you brought into the bubble will be instantly locked down and ready for their pinata beatdown.  One of the guides I watched said that the collapsing the bubble on purpose with mobs in it will do a flat 10% of their health per each mob in the bubble, so if you can get 10 mobs in there then collapsing the bubble will be an instakill on everything (regardless of power strength), but I’ve not had a chance to test this for myself.

So yeah, you can just hang out in the Rift, get max energy, mobs gather around you while trying to hit you even though they can’t, then you hit Stasis, followed by Cataclysm, and then kill everything at your leisure while still being able to ignore any mobs outside the bubble since they’re not in the Rift and can’t affect you.  It’s CHEESY!!!  And tbh, I love it… Love it enough to make posts on a consecutive days, which I almost never do.

The build I’m currently using — Rage and Quick Thinking are for survivability should I mess up. Cunning Drift, Narrow Minded, Augur Message, and Primed Continuity are all for duration.  Streamline makes things cost less to cast. Flow gives more Energy to cast things and to act as my health pool due to Quick Thinking, and Natural Talent makes the abilities cast much faster. Narrow Minded reduces the range of my abilities, but at 61% the bubble is still large enough to protect anything I’d want to or for teammates to duck into for protection, while small enough that it won’t make teammates hate me for making lots of things unhittable by them if they’re outside the bubble. And it makes it easier to see if a Nullifier is coming so I can get it taken care of before it can collapse the bubble too.

I can see how it wouldn’t be for everyone, and even as powerful as it is, there are still mission types for which I think it would be rather unsuited.  And of course, bosses are immune to Stasis (though you can hide in the Rift and pop out to hit them during the windows in which they’re vulnerable), and the Corpus Nullifiers will collapse your bubble and pull you out of the Rift, plus the Stalker’s got an attack that nullifies your Rift as well, so you’re really only 99.8% invulnerable, but still… Now that I know what this frame can do, I have a hard time imagining why everyone and their dog doesn’t use this as their primary frame, just swapping out in niche cases where it doesn’t work as well.  I will probably be doing this myself anymore…

Anyway — Happy Gaming out there! 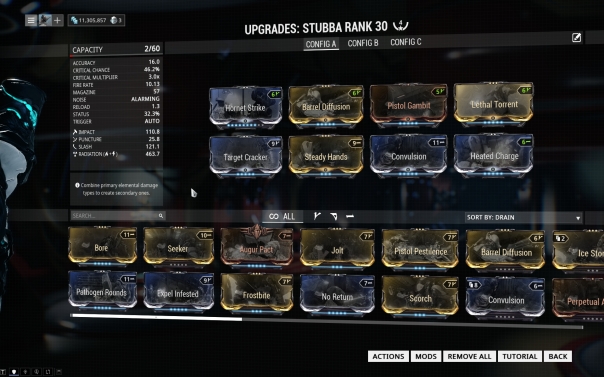 This is my Stubba pistol build so far. According to the warframe-builder site it currently does 14,250 dps while burning a clip, and 12,600 taking reloads into account. I took out a Juggernaut by myself with it last night. Apparently once I get the Primed mods for it and get them leveled up this will approach 30,000 dps. That’s rather amazing for a secondary weapon.

Posted on January 31, 2018, in MMO and tagged Warframe. Bookmark the permalink. 2 Comments.

← [Warframe] It’s All About The Mods
[Warframe] Progress Continues →