[Pillars of Eternity 2] Dipping a Toe

Sorry for the menu shot, but I think I hit F6 like Warframe wants during the opening splash, so I didn’t actually get a picture of that…

I bought and installed it last night, but haven’t done much more than dip a toe in.  I loaded it up and went through the initial scene where it recaps the 1st game and leads in to character creation without trying to remember anything I’d done in the 1st game, so it was a simple start.  Character creation and stats appeared to be identical to the 1st game, though with some UI changes so now one can see the skill trees instead of having to look up what skills lead to where and at what levels.  The actual character model has been improved also, so that’s nice, if a bit unnecessary since it’s an isometric view so it’s not like you ever really can get in to see your face in the course of typical play.  And there are now weapon proficiencies you can pick that give an optional bonus/tradeoff when you use certain weapons.  Like a wand proficiency that adds a CC effect to wand attack, but makes the attack do less damage, or the sword attack that does additional penetration at the cost of accuracy.  Stuff like that.  But yeah, it appears that it’s close enough to PoE1 that the old build guides and videos for that game are still valid for this one too.

Anyway, I finished the tutorial map and cave, then found that on the world map instead of just clicking on the next icon over and being told “ok, that passed 12 hours of time” you actually click and move around in there until you get to the next area.  I assume there’s a chance of random encounters by doing this, but I didn’t see any.

I’m a bit formless at the moment, so it’s good to figure out what form I’ll take… This shot is taken just as I was about to head in to character creation.

This time your companion in the tutorial area doesn’t get killed, so you have your 1st party member right from the get-go.  The 2nd one is found in the 1st town almost immediately.  1st is Eder, the fighter from the 1st game, though you can choose to make him a rogue or a fighter/rogue dual-class if you want.  The 2nd one was named Xoti, IIRC, and is a priest.  I was winding down then, so I just kinda clicked through her stuff, so I don’t recall her multi-class option, just that she had one.

And that was last night.  This morning I did as I typically do and woke up well before my alarm went off, so I had about 45 minutes to kill.  Since I’d gotten my feet wet last night, this time I chose to import my PoE1 saved game instead.

It really didn’t mean anything, just that in the dialog just before character creation that I had a couple of different dialog options, however, I was still back at level 1 and could make myself any race/background and class I wanted.  I was somewhat annoyed that while I could skip past the opening dialog stuff, I still had to walk the long ribbon of light to get to the initial scene before character creation, then do the slow walk out of character creation to the actual start point and couldn’t hit F for fast mode or anything during that. 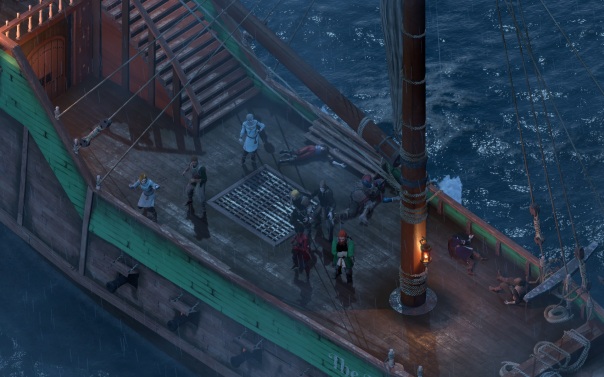 You start on a boat while being attacked by pirates! As you can see from the bodies, that was a bad idea on the pirates’ part.

I see why they did it as a reminder for if you haven’t played the 1st game in a while (which I haven’t), but while it was kinda cool the 1st time, on the 2nd time really just wanted to make a character and start, not have to go through the 5-10 minutes of pre-start stuff.  As an aside, even before character creation you have an option to simply say “Eh, no thanks” and the game then ends and the credits roll, so it can be “beat” in less than 10 minutes…

Anyway, I recall that in my prior game I was a Pale Elf wizard and loved it, so I went with that again.  I think I even vaguely remember the min/max stats to use — max Might, Intellect, and Perception.  Keep Dex and Con close to average, and dump Resolve.  I hope that was right….

I didn’t have enough time to finish the tutorial cave this morning, though, so I’ll finish that tonight and then grab the priest again, then start exploring for real.  So far so good!

Happy gaming out there!

Posted on May 10, 2018, in General and tagged Pillars of Eternity. Bookmark the permalink. Leave a comment.