Thoughts on the Official Magazine – Aion 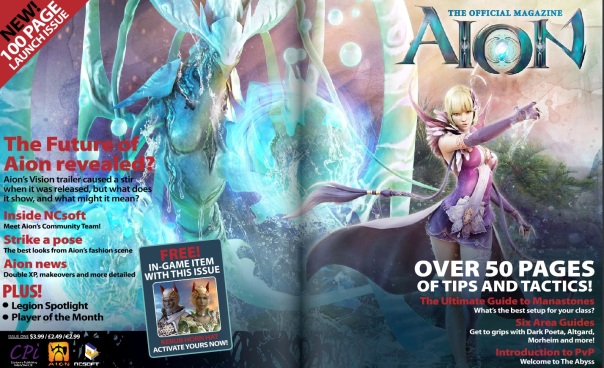 Today was the official release of Issue One of the Official (digital) magazine for Aion. I decided to subscribe for a year, and I made no hesitation to mention that it was due to in game perks and pre-order items. I signed up before I knew what the magazine would look like, and I had a LOT of people tell me what a horrible idea it was (the magazine in general).

Now that it’s been released, I can talk with a little more clarity.

The first issue contains 102 pages which is a ‘bonus’ for this first issue. The future ones will not be quite so lengthy.

Do I think it was worth the cost? I do. Especially if the quality of the articles and guides keeps up throughout the next issues. Sure it’s quite “new” to me and I’m not exactly sold on the whole “pay us money but you don’t really get anything tangible” but it’s still an hour or two of entertainment and a lot of knowledge that I didn’t have before.

This issue also included a huge feature on the “Future of Aion”, and some great interviews. I would like more player involvement (there is a feature on guilds, and a player of the month but what about some fan art or community events) but aside from that it is a pretty sleek neat looking digital magazine, and I don’t personally have too many complaints about this new revenue method.

Are you a fan of Cutscenes?

Maybe it’s because I haven’t played a lot of single player games in my life time but I absolutely love cutscenes. I’ve really come to appreciate them in MMOs too as they’ve been making more and more of an appearance. Aion has a good selection of cutscenes, and one of the things I really like about them is that they don’t drag on and on. They’re quick, so it doesn’t feel like they’re taking a big huge chunk of my game play out.

I really liked the cutscenes that EQ2 had added (there’s one in Najena’s Hollow tower, there was one in the Halloween event, and there’s one in Fens of Nathsar when you move over to the ice floats) but I felt they were a little long. You can exit them quickly by hitting escape, but I do suggest everyone watches them at least once.

I also love the cut scenes in LotRO, although they’re a little different. They’re usually action packed, and you still feel as though you are very much a part of the scene if that makes any sense. It doesn’t feel as though you’re removed from the situation at all.

I appreciate the time it must have taken the developers of Aion to incorporate every single character into their scenes. Some of the first ones that show your Daeva’s past are simply amazing, and the ‘visions’ that everyone goes through before they get their wings really left me breathless. Of course now that I’ve seen both the Asmodian and Elyos side I tend to want to rush through them.There’s no real re-playability when it comes to cutscenes, unless you’re a fan of watching a different avatar walk through the same path that a previous character has already experienced.

So what can game developers do to help this and keep their scenes fresh? Well, of course it means extra work, but they could try to add more class specific text to the cutscenes. While a lot of us may play the same race over and over, few play the same class. Maybe the cutscenes could ‘remember’ what previous tasks a character has already done (ie: a recent achievement goal) and make a comment about it. Draw the characters into the story that much more. There are tons of creative options out there. I just hate seeing all the hard work that gets put into these scenes go to waste as people just want to get to the ‘meat’ of the game. Me, I’m all about a good story.