The Fallen Earth Epic Gear Giveaway is a 16-question, multiple-choice “battle test” relating to Fallen Earth, Alienware and Nuclear Blast Records. Starting today, participants who answer all 16 questions correctly by March 16 will be automatically entered to win a slew of prizes:

One Grand Prize Winner Will Receive:

To enter, players may visit www.fallenearthcontest.com. All questions must be answered correctly and only one entry is accepted per valid email address.

For the full rules and regulations, visit: http://www.fallenearthcontest.com/rules.php 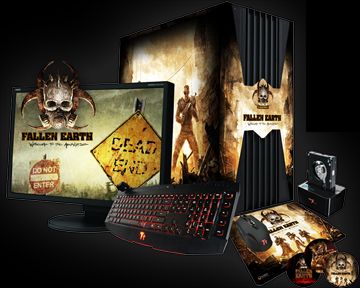 To enter, players may visit www.fallenearthcontest.com to enter and start playing. One entry can be earned each day a player logs into the Fallen Earth game through January 7, 2011.

New players are invited to participate and the developers have temporarily extended the free trial to 30 days through January 7. Name, email and active Fallen Earth game account are required for entry.

For the full rules and regulations, visit: http://www.fallenearthcontest.com/rules.php

“The premium features of the Fallen Earth Mobile Companion App takes gaming to a new level,” said Phil Hall, CEO of Icarus Studios. “Our players can take advantage of this first-of-a-kind application to directly interact with Fallen Earth game-play while on the go.”

Fallen Earth app users currently have the ability to interact with other online players via chat, receive in-game mail, visit the auction house and view maps, character stats and crafting recipes, however, with the new features, players will now also have the ability to:

“We’re excited about the release of the expanded Fallen Earth mobile companion app,” commented Doug Dyer, president of AFK Interactive. “The feature set available to players is far and above anything available and will give them constant access to several much used features of the game. This is truly a first of its kind app.”

Beginning today, all current app users have the ability to access the premium features for a limited-time trial, ending September 13.

Access to the Fallen Earth app premium features will be available for all supported devices via the official Fallen Earth website (www.fallenearth.com) for a one-time charge of $9.99 (USD).

Customers must have the Fallen Earth companion app, available from iTunes, the Google Android App Store or Blackberry App World. A network connection and active game account are required for use.

For more information about the premium features trial, visit: www.fallenearth.com.

“The new pricing is the first step in rewarding existing customers,” said Jessica Orr, marketing manager for Fallen Earth. “We have a tight community and want to make sure they know how much we value their support.”

Effective today, new players are encouraged to sign up for one of the three long-term subscription plans to take advantage of the monthly savings.

Current customers under the three, six or twelve month plans will see the reduced fee applied automatically at their next billing cycle.

Fallen Earth – State of the Game

We wanted to take a moment to convey some of the exciting development in progress and also provide a glimpse of where we are and where we’re going.

However, before we get into all of the new stuff we wanted to touch base on a couple of items.

First, we know some of you have expressed concern over Lee Hammock’s departure from Fallen Earth. We appreciate the contributions that Lee has made to the project and as a team we took the time to lay a solid foundation—we are steadfast in our vision for Fallen Earth and with the community’s support will continue to move forward and deliver great content. We have solid plans for many new upcoming patches, and are excited about the ongoing work on Sector Four. We have chosen purposeful and attainable goals with intent, and we’re excited about delivering these to you in the form of patch updates, new features and continued optimizations.

Second, we are happy to report that last month we witnessed double-digit percentage growth in subscriptions and an increase in sales. We are working on several instrumental partnerships that will increase our presence in both digital and retail channels, and we look forward to working with you to expand our community and help new players feel welcome.

We’ve released some information on exciting gameplay features and additions forthcoming in patch 1.4 and 1.5, but we’d like to take a moment to explain some of those in greater detail. Originally the new content area Deadfall was to be released with patch 1.4, and then a truckload of PvP elements in 1.5. As development progressed, it turned out that we’ll be able to release both of these amazing feature sets in one mongo patch, 1.4. Scheduled for Q2, the patch will include new arena-style PvP areas, a new content area called Deadfall, mutant mounts, an achievement system, conflict town upgrades, and clan wars as well as continued optimizations and improvements.

Blood Sports, our new arena-based PvP, will provide players with a chance to participate in four different PvP events: Deathmatch, Assault, Survival and Capture the Flag. These games are designed for solo or group play and are competitive for both ranged and melee combat styles. Players can sign up through a world-wide queuing system in game. The matches will be held in specially-designed levels, complete with yelling announcers and Deathtoll points. Merchants throughout the arena also carry a horde of new PvP-oriented armor and gear.

The Deadfall area will provide more than 140 new missions and explorable area for players as well as a level cap bump from 46 to 50. The area unfolds the mysteries of LifeNet and provides a chance to learn more about Shiva’s Favored while allying with them for a few special missions. Five new settlements dot the area, including a Shiva’s Favored encampment and the ruined city of Los Alamos. The area also features six new instances, including an opportunity to help the Grahams reclaim LifeNet facilities and stop the Shiva’s Blessed from fulfilling their plans.

If it sounds like there’s a lot of area to see… well, there is. But at least the ride will be an enjoyable one, since players have the opportunity to help allies and earn a Blight Wolf mount. One of our favorite creatures in the game, the Blight Wolf is pretty huge and awesome and will be comparable to a horse in terms of storage, speed and food.

In addition to the arena action, we’ll be breaking out with expanded world PvP in Clan Wars. Clans will be able to declare war with each other based upon a start date and time, set duration (or point value), and a war roster. Players will also be able to wager on the winner for some additional chips. Once wars are declared, members of each clan’s War Party will be able to kill each other at will through the entire world. No PvP zones can contain these conflicts. Several challenge-based mechanics will up the ante and give each side the chance to make things personal. Combined with a cleanup pass at our conflict towns, this should give more clearly defined avenues for both clan and faction based conflicts without forcing them to overlap.

Additionally, we’re working on several smaller improvements, which will be staged out over the next few patches. The animations team is hard at work redoing all melee animations to provide a more crisp and responsive feel. We are also in the process of implementing sculpted terrain, which will give the game a much more realistic, detailed environment. The effect system is being revamped to address stacking imbalances. The new streamlined system will make it easier to understand and use. To facilitate these changes we will be providing all characters with a one-time respec (finally! :). Rifles and one vs. two handed weapons will see more balancing efforts as well.

Slated beyond the upcoming patches, Sector Four is already in development. We know it may seem like a myth, but it’s real—and we’re sharing a sneak peek of the concepts with you. In Sector Four, players experience a much more intimidating environment. GlobalTech conducted some pretty scary biological experiments in this new area, and the power of nature is evident in how the plants have taken over buildings and even entire cities.

With so much going on, and so many exciting things ahead, we are excited about the work we’re doing and we look forward to getting your feedback. Thanks for being such an awesome community and for your support and suggestions

You can read all update notes on the Fallen Earth web site, here.