Beginners Tips for the Great -Not- Underground Empire

My previous post about Zork generated some interest in the game, which is really cool. So I thought I’d write out some tips for people who want to start and enjoy the game.

First thing to mention is that your AP are limited, you get 30 each day to spend. These are saved for you up to three days worth, so when I played I waited until the third day so my gaming sessions were longer than the 15 or 20 minutes it normally takes. Your time is intentionally limited to encourage you to pay for AP potions in their “perks” store.

Which brings me to my next point about the store. If you’re willing to spend money to buy replica Coconuts of Quendor and then spend those in the perks store, buy an Aimfiz Amulet first. For six coconuts ($4) the amulet gives you the ability to return to your base at any time for no action points. I can’t stress how useful this is, as having one completely changes the dynamic of the game. You only bank loot and coin you collect adventuring when you return to base, and if you die while exploring you drop everything you’ve collected. It is much more efficient to be able to explore a bit, get some loot and return to base for free, then explore some more… and if you’re injured while exploring no more decisions to continue on or spend that precious point going back to base to heal. If you’re going to buy anything in the perks store, buy an Aimfiz Amulet. 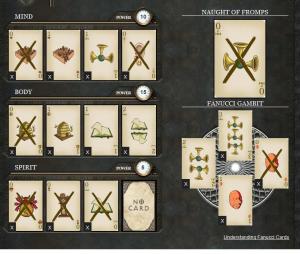 The next important thing is not to ignore the Fanucci cards you gain occasionally from battles. The game is balanced heavily toward using these cards to their fullest extent in your gambit, as you can see in the screenshot above. A couple important things about Fanucci the game does a poor job explaining on the help screen: always put your strongest card combo into your gambit, then use the leftovers in the other three groups. The Gambit translates into a direct boost to your attack and defense in combat, which is a much stronger benefit than any gains you get to combat skills from Body or magic from Spirit. My current gambit as seen above is 27, which adds a bonus of 135 to each of my attack and defense. Also, watch the interactions between different card suits and how they change the hand’s power rating. You can see above that Fromps work well with Faces, and Hives with Books, etc. Don’t stack more than two cards of a suit in a hand, it ignores the effects of more than that. It’s not a hard system to figure out, but if you really want all the spoilers they aren’t hard to find. Where’s the fun in that though? 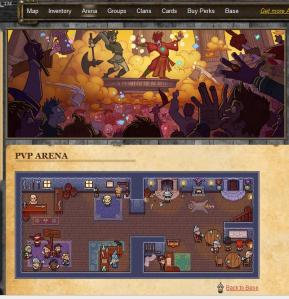 Once you have a good gambit if you’re having trouble making money you can fight in the Arena and bet on yourself to make good cash. The key is to find players that have significantly lower attack/defense than you, and if their magic and attitude are weak against yours that helps too. You can wager an amount up to 100x your current level, and make that back if you win the fight. Unfortunately you can’t game the system and beat up on one weak player over and over, you can challenge someone only once per day. It gets tedious, but by carefully choosing targets you can make excellent money at lower levels using these tactics.

Hopefully these tips help you get more out of your early Zork playing, and watch next time to see more of my wanderings!

Posted in Legends of Zork

One of the guilty pleasures I pursued last year in between long sessions of Everquest 2 and Vanguard was a little game called Legends of Zork, produced by Jolt Online Gaming. Now, I know for any of us who took a computer science class or grew up in the 386 era Zork brings back fond memories of puzzle solving adventures with just the right amount of corny humor. Well, you may be disappointed to know that this isn’t the old Zork, or even a new spin on the old Zork really… no puzzles to work your way through, no rye to feed to the plants and not really much flathead humor. Legends is a browser based achievement game, with a little Zork flavor mixed in to give it a theme and draw in players. 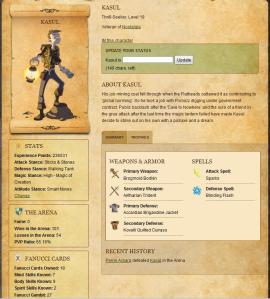 In this game, you’re a recently unemployed wanderer who managed to steal some items of questionable usefulness from your former employer and have decided to try to make a living adventuring. This is an achievement game, so your goal is ultimately to try to climb the leaderboards and be the best that you can be, or at least have done something no one else has. You can view your character’s current level, equipment and Fanucci Gambit from the profile screen, my character’s is shown above. 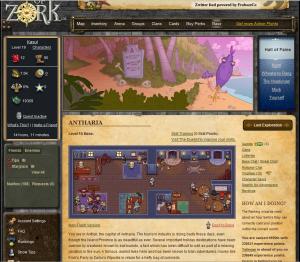 The game is played in a browser window, no software to download. You begin your daily adventure in a home base, which begin with the white house with a mailbox in front familiar to Zork veterans and move on through cities and towns in the new Zork. My current base is Antharia, as seen above. While in your base your health is healed to full, and you can sell things you’ve collected on your adventures and bank your hard-earned zorkmids (both happen automatically) as well as spend your wealth on an ever growing list of weapons, magic spells and defensive items. Character advancement in the game comes from a system of skill points, each level you gain one choice on a table of skills that give you statistic adjustments that are used in combat. 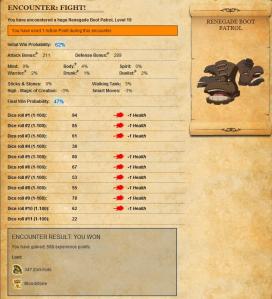 Adventuring is done by moving to an adventuring area and choosing to explore. As you explore you spend action points, and for each action point a random encounter (like the one shown above with the renegade boots) is generated and resolved. All you do to explore is click a button, the actual combat happens automatically and the die rolls that you see above are shown to you along with the result. It’s simple as can be, but surprisingly addictive. Your % chance of winning a die roll is modified by your equipment and Fanucci cards as well as the enemy’s fighting style and base difficulty. At it’s heart this game is all about those statistics, and it rewards a min-maxing approach to gameplay.

A neat way they’ve made the equipment system not only about +stat bonuses on swords and spells is by introducing the Double Fanucci system. In this, you collect cards which can be used to build what are called gambits, four card hands that will give you a bonus to your attack and defense based on the point value of the cards you choose and their interactions with each other. The system isn’t as complex as it looks and I won’t spoil it here but as a newcomer you shouldn’t ignore it… the bonuses that your gambits give you are absolutely necessary to adventuring past the starting area.

Since I’ve last played it looks like they’ve added some new features to the game, such as a weekly lottery and trophies for achieving things in the game. If you enjoy achievement based gameplay I would say give Zork a try, but if you’re looking for the next great exploration and puzzle solving adventure then you’re going to be disappointed. This isn’t the old Zork and that’s really unfortunate, but on its own merit it is a game worth giving a look.

Special bonus for you nostalgia seekers! All three text adventure Zork games are available here. Now for the low low price of 0 Zorkmids!

Posted in Legends of Zork