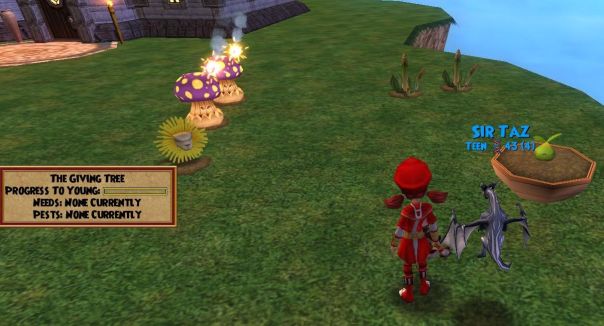 Eager to put your gardening skills to good use? Why not pick up The Giving Tree seed from the market and make a donation to a fantastic pair of charities at the same time that you grow yourself some awesome gifts. This is exactly what KingsIsle has done for players in their 2010 charity drive.

“Give the Gift of Magic with this Giving Tree!

Last year our players raised $125,000 for Charity! This year, we are offering our players a chance to give a little Magic to someone in need.

When you purchase of a Giving Tree Seed from the Crowns Shop at the price of 2500 Crowns (approximately $5), KingsIsle Entertainment will donate the net proceeds to the following two charities in Texas:”

You can read more about these great charities on the Wizard101 web page, as you can see above I’ve already picked up one giving tree and planted it in my make shift little garden. I’ve also got a dandelion (which I can harvest for the first time in 5 hours!) two boom shrooms (that rewarded me a little coin and some crafting materials today) and two desparagus that have yet to reach the mature stage. It’s not often I get to make time for such a fantastic game, but the gardening has me checking in each day to clear pesky bugs and take care of my plants needs. If you haven’t logged in for some time I highly suggest you do so and go visit Moolinda Wu if you’re level 12 and above so she can get you started.

Happy gaming, no matter where you find yourself! 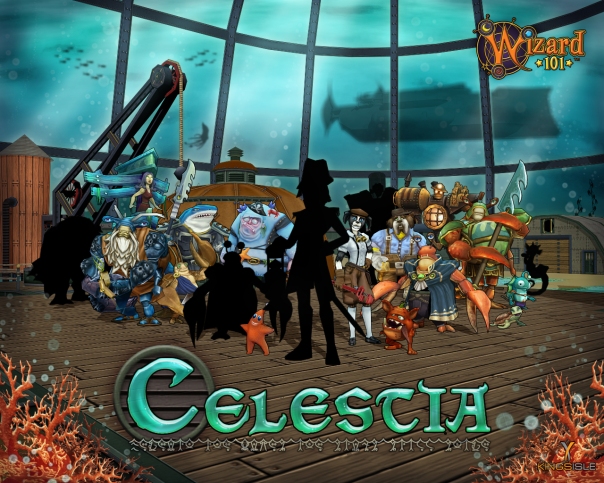 It’s a small update this time around – can you spot it? 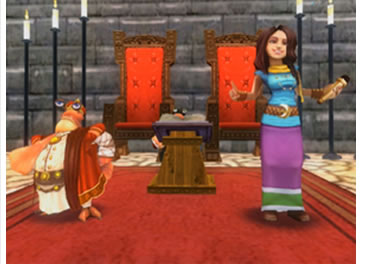 From the Wizard 101 promotional email that went out yesterday:

Get ready for a limited-time quest featuring a teen icon.

Save Pop Sensation
Selena Gomez!
There is a new and exciting quest for you in the world of Wizard101 — “Round & Round”. Pop sensation Selena Gomez is being held prisoner in an underwater tower in Wizard City, and only you can help her escape. But hurry, because this quest is only available for a limited time!
Look for this exciting new quest alongside
the release of Selena Gomez & The Scene’s new record this week.

Enjoy Some New Tunes!
Start your adventure on the right note by checking out Selena’s iTunes® page,
featuring her new CD, A Year Without Rain.

The guest appearance by the star of Wizards of Waverly Place is part of the build up to Wizard 101s new underwater world Celestia, set to open soon.

PLANO, TEXAS (September 2, 2010) – Since its launch in September 2008, KingsIsle Entertainment’s flagship game Wizard101 has become one of the most popular online destinations for family entertainment. Over the last two years Wizard101 has received critical acclaim as one of the best massively-multiplayer games on the market. Millions of players have discovered the mysteries of the Spiral, explored hundreds of hours of epic storyline, and joined to create a vibrant player community.

“When we launched Wizard101 two years ago, the team knew we had something very special on our hands,” said Elie Akilian, chairman and CEO of KingsIsle Entertainment. “However, we believe that the success we’ve seen, while extraordinary, is just the beginning. The number of talented professionals working to bring great new content and capabilities to Wizard101 continues to grow. For everyone who loves and plays this game, it will just keep getting better.”

In early Fall, the next chapter in the Wizard101 story will begin with the introduction of the world of Celestia, the game’s largest and most ambitious expansion to date. In Celestia, Wizards will achieve new heights of power as they progress to level 60, discover extraordinary new spells, venture beneath the ocean and learn the deepest secrets of long-forgotten magic.

To promote the launch of the new world, later this month KingsIsle will launch a quest featuring one of the hottest teen icons on the planet. The quest, which will introduce players to new underwater environments and preview features of the upcoming Celestia expansion, will be available to all players in the game.

“Wizard101 raced past the 10-million player mark in June and continues to grow every day,” said J. Todd Coleman, vice president and creative director of Wizard101. “This is an amazing time for KingsIsle, as Wizard101 seems to have hit a tipping point. With the upcoming launch of Celestia, the future looks incredibly exciting.”

In Wizard101, kids and families enter the magical world of Wizard City as student Wizards setting out to hone their skills, cast spells and summon powerful creatures to fight evil forces. The characters and worlds of Wizard101 are influenced by literature, history and pop culture, giving the game a depth and quality appreciated by families and players of all ages.

Ten Million Wizards Join Forces to Save the Spiral in Wizard101

Congratulations KingsIsle on a fantastic achievement, and don’t forget to log in and get your very own party pack! Details are in the announcement below:

PLANO, TEXAS (June 22, 2010) – KingsIsle Entertainment, Inc. today announced that since its launch in September 2008, more than 10 million Wizards have registered to play Wizard101. Today, the Wizard101 player base continues to grow at an accelerating rate and KingsIsle expects rapid growth to continue for the foreseeable future.

“Over the last twenty months our domestic launch has taken us from an unheard of company with an unknown product to running one of the most successful properties in the family entertainment space,” said Elie Akilian, chairman and CEO of KingsIsle Entertainment. “I am profoundly grateful to the millions of extraordinary people who call Wizard City home and the  talented writers, artists, designers, producers and engineers who have come together to create this magical world.”

While the technical and creative design requirements to create a virtual, safe and compelling online universe such as Wizard101 are enormous, it is the active and enthusiastic community of players that truly makes Wizard101 come alive.

“We are overwhelmed and honored by this huge achievement,” said J. Todd Coleman, VP and Creative Director of KingsIsle Entertainment. “We will continue our work to add exciting new content and features to Wizard101 through the launch of our next world, Celestia, and well beyond.”

As a small gesture of thanks to the wonderful denizens of Wizard City, KingsIsle Entertainment is offering every Wizard a complementary “Party Pack” and encouraging them to throw a grand celebration welcoming Wizard #10,000,001 to the Ravenwood School of Magical Arts. Each Party Pack will contain a decorative banner, balloons, a festive party hat and a celebratory cake.

To receive this FREE item set, simply go to www.wizard101.com/promo and enter the word PARTYPACK.

In Wizard101, kids and families enter the magical world of Wizard City as student Wizards setting out to hone their Wizard skills, cast spells and summon powerful creatures to fight evil forces. The characters and worlds of Wizard101 are influenced by literature, history and pop culture, giving the game a depth and quality appreciated by families and players of all ages.

Wizard101 can be downloaded at www.Wizard101.com. Players seeking access to premium areas and items may purchase pre-paid cards in participating stores or purchase a subscription or Crowns online. New worlds, activities, pets and Wizard clothing are periodically added to the game, creating an ever-changing world with new things to see and do.