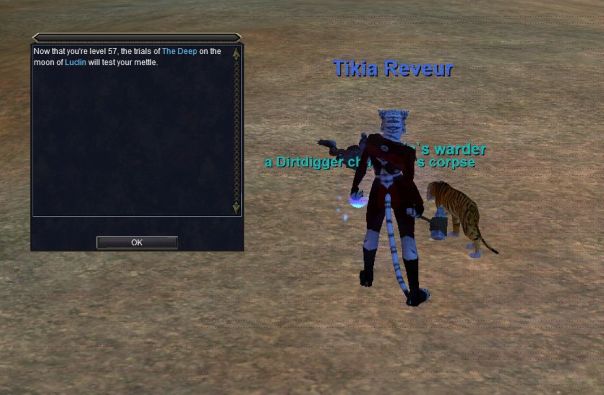 I moved two of my characters from my 2nd EQ1 account over to my main account. This included my 80 enchanter Kameeko, and my 56 beastlord, Tikia. My main reason behind this was that I no longer want to keep both accounts active, and I didn’t want to just forget about the characters either. Kameeko is my crafter, and I’ve worked really hard on obtaining her levels. The beastlord isn’t exactly something amazing, but it was still 56 levels that I didn’t want to start over with.

I spent most of the evening organizing hotkeys, cleaning out banks (setting up a new trader for the bazaar because my previous one was level 1 and deleted in the mass wipe that came) and then decided to attempt to gain a level on the beastlord. She’s not exactly the best geared character, sporting defiant stuff for the most part, but she’s not half bad. I picked up a healer mercenary and spoke with the npc outside in PoK to figure out what the hot zones were for my level.

Level 50 was broodlands, 55 was bloodfields. I didn’t think my beastlord would be able to tank bloodfields very well by herself, so I went to zam.com to search for how to get to broodlands, because it’s been forever. I remembered the zone vaguely from my adventures not that long ago, but still wanted to confirm the location.

Not too complicated. I have maps installed, and made my way there. Even with the recent server merges I was the only person in the zone. I’m guessing a lot of people are already 80+ since the level cap didn’t go up last expansion, and that a lot of them are doing (what I believe are) monster missions because I constantly see people looking for mm. Or being requested for a ‘task add’ and the like.

I popped my lesson of the devoted (bonus experience for an hour) found a comfortable wall to pull to, and then hung out with my mercenary and proceeded to take part in a good old fashioned level grind. Ah, how I had missed them. General channel was pretty busy considering it was 2am (EST) on a Wednesday night, and I had a great time. Before too long I found that my little beastlord had reached level 57, and a message popped up saying I had gotten mail. Every level or so Sony sends characters who have leveled a little message with a suggestion on ‘where to level next’ – for a minute or two I contemplated doing a weekly article about these zone suggestions and attempting to level my character through them – however – I also realized what a huge disadvantage I’d be at. Basically with the inclusion of hot zones it makes all other zones of less value to level in (unless you’re trying to quest, or looking for a particular piece of gear). Hot zones were added to push players together into a local area, to make grouping easier. Sadly, aside from soloists and those who have static groups a lot of ‘regular’ zones now go unused until they’ve got the lucky chance to become a hot zone.

It was still a really fun night, and I remembered all of the reasons why I love EQ. The game has changed, but none of the reasons on why I love it have. I started talking to a friend about all of the things we used to do in game together and I was just hit by wave after wave of nostalgia. No game I have played has ever come close to the feeling I get when I’m playing EQ (be it 7 years ago, or today for that matter).

I’m looking forward to seeing what other trouble I can get into. If you happen to be on the Drinal server let me know – my characters are:

Happy gaming, no matter where you find yourself!

Finding a Balance in Gaming

Playing video games was never something I thought about as a full time job, even when it became my full time job. It was still always fun and while I did have to start looking at things slightly different (as in, I had to pay more attention to things like zone names and mechanics) it was still never really a job to me.

Until I started running out of time to simply do what I wanted, and needed to concentrate on specific games, for specific things. Then it hit home, I would have to actually budget my game time, and figure out a schedule in order to accomplish thing I needed to do.

At any one time over a two month period (because work publishes their magazine once every two months) I play between 6-20 games. Six of those games are my ‘typical’ games that I write about on a steady basis. Those games are EverQuest II, EverQuest, Vanguard, Wizard101, Fallen Earth, and Aion. I have very little ‘wiggle room’ when it comes to those games because they’re what I play to supply a salary, and while I do have creative leeway (I can chose what aspect of those games I’m writing about) it’s very important that I am involved as much as I can possibly be.

All work and no fun makes for a very boring life, so of course I have other games that I play. These games fluctuate depending on my mood and my interests, and that’s where the whole ‘Nomadic Gamer’ idea came from. Right now the games include EVE, and Lord of the Rings Online, as well as a little Allods, and Runes of Magic. Then there are my non-MMO games (which I do still try to find time to play) like Torchlight, Dragon Age, Sims3, and console games like Darksiders and White Knight Chronicles. I rarely ever manage to finish a game before moving on to something new, and since I’ve only played games for the last seven years it’s all pretty new to me. My brothers were the ones growing up with the nintendo and playstation and all that stuff.

There’s other interests I have that I need to allot time towards as well. Things like photography, reading, writing, being a guide, you know the basics. Coming up with a schedule for gaming is not something that I find very fun but something that I need to do out of necessity. The down side to all of this is that my schedule involves me gaming during day time hours and while there are lots of European friends around for me to talk with, it means that in order to hang out with the majority of my friends I need to also game during the evening hours (which is when I’d typically like to take a break from gaming altogether and go get something else done).

This year marks my 2nd year working for Beckett, and I have JUST finally found the balance for me. It has been a long time coming. Some times I would grow very frustrated and I wasn’t sure if I could do it all. Of course it takes barely a gentle breeze to upset that balance but hey at least it’s there!

How do others who play multiple games work on their own balance? Do you use a schedule or simply go where ever the games take you? Are you perhaps one who subscribes to games via lifetime subscriptions so you’re not hassled with a monthly sub and the guilt that may come from not getting in enough hours? Let me know in comments!

Thank you, and happy gaming!