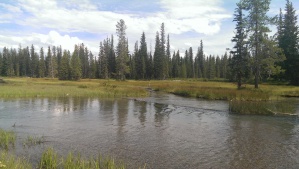 It’s kinda hard to see, but there’s a Sandhill crane in the middle of this

I’m back from my trip to the Yellowstone area, and even though I had a 5 Mbps DSL connection there (prior years were 512K, so I didn’t expect it to be that good)…. well, I did game some, but it was mostly Civ5 so I could be up and about at a moment’s notice to play outside and whatnot.  The daystar doesn’t burn. . . . .  much.

Anyway, the laptop I was borrowing from work was able to run ESO at a pretty constant 20 FPS, but that was just choppy enough that I really only logged in for my hireling emails on my 2 crafters and to do the daily horse upgrades.  I did muck about with the dyes a bit and I’ll have a post later in the week with some shots of how my look has changed on some of my characters.

Since “everyone” is doing it — there’s this survey for anyone who’s played WoW over at this site and while I answered it at their actual survey site, not here, I still thought I’d post what I answered (more or less, since I don’t have it to copy/paste so this is from memory 😛 ).

1. Why did you start playing Warcraft?
Buncha IRL friends were playing so I bought it to play with them.
2. What was the first ever character you rolled?
Undead Priest.
3. Which factors determined your faction choice in game?
Friends were playing Horde, so I did too, but since I’m an inveterate altoholic, it wasn’t long before I had toons in both factions.
4. What has been your most memorable moment in Warcraft and why?
Getting spawn-camped by a mob in a cul-de-sac graveyard in a zone that I’d wandered into that was too high a level for me.  The thing was in the graveyard, so I couldn’t even use my hearthstone to get out — it’d aggro and kill me before the cast time was completed, and since the graveyard was a cul-de-sac in the zone wall with just the single exit and WoW doesn’t (didn’t?) have a sprint function I couldn’t run away or sneak around it either.
5. What is your favorite aspect of the game and has this always been the case?
Nothing about WoW really grabbed me, so I only played it for about 2 weeks in vanilla and then for another week in BC so I could try out the Dranei and Blood Elves.  As a result, I can’t really say anything about it was “a favorite thing.”
6. Do you have an area in game that you always return to?
Didn’t play it long enough to really know where anything was.
7. How long have you /played and has that been continuous?
Real-time play was less than 3 weeks, and I had a bunch of alts.  Got 2 characters to level 14 or 15 and the rest might have made it to 7 or 8.  Can’t imagine the /played was very long on any of them.
8. Admit it: do you read quest text or not?
Quests have text?!?!?!?!?!?!?!
9. Are there any regrets from your time in game?
No.  Can’t say anything was “wrong” with the game, it just didn’t trip my trigger to want to play it either.
10. What effect has Warcraft had on your life outside gaming?
None whatever.  Again… didn’t play it much.
***
And there you have it — my limited WoW experience.  Happy gaming!

Currently i have been having a difficult time deciding on which MMO to play, i am a die-hard Everquest 2 player and can be found on the Crushbone server every night until the wee-hours of the morning. But recently i have been getting that blah feeling, i have completed all the quest with in the last expansion that basically are solo or heroic, i have not done the raid content or the group instances just yet as i just don’t like grouping with just anyone or PUGs, i do have a great guild “The Knights of Marr” behind me that gets together and works on knocking out these types of Zones, instances and group quest. We are not big enough or at least we do not have the active numbers to do the raid content that i would like to do, but they are a great bunch of people that i can call family.

But enough of the mushy things, the main thing is i have grown bored with Eq2, i do not want to cancel my subscription or stop playing eq2 as i love what SOE has done and has evolved the game over the years, i do however want to find something that i can gain as much passion for as i have with eq2 over the years. I have tossed the idea of going back to World of Warcraft, i have seen some new screenshot of the upcoming expansion and things look awesome. i originally left WoW due it it being too cartoony and felt like there were more 12-15 year olds playing, and didn’t want to deal with all the drama that was happening on the server or in the chat, plus the folks i original started playing WoW with left the game and i didn’t have the companionship of my friends or a guild to fall into the players, so i went back to Eq2. As i mentioned before that i have recently seen new pictures of the upcoming expansion of WoW and wanted to jump back in, but i am torn between all the MMO’s and the time that i will need to direct towards playing as i still want to continue playing the current MMO’s that i am associated with.

I also have an account with Star Trek Online, which i think is a well rounded game for as far as i have progressed (Lt. Commander 2), i grew up with the original series or at least the re-runs and fell in love with the movies and different spin-offs of the series. When i heard that they were making a video game, i was excited and could not wait for it to be released, to me it was one of those must have games and i have not been disappointed so far.

So this is where it brings me now, my delimia per say, what to do, do i re-enter the world of Azeroth and work my way up to my current expansion “Wraith of the Lich King” or do i just wait till the expansion comes out and then re-enter this ever changing world or do i just scrap the idea in general until i can manage the time to play all the MMO’s that i want.

I guess only i can make that decision and i need to consider the pro’s and cons of my choices, i will still find the time to enter the world of Norrath and Deep Space for any exploration and adventure, it’s just the time issue since there is one of me and 4 games, if not more that i want to continue to play……..now where did i put the human replicating device……hmmmmmmmmm wonder what this button does…(click) AhhhhhhhhhhhhhhhEwwwwwwwwMmmmmmmmZzzzzzzz…………

Well until next time happy hunting in all the worlds that you may call home.